The largest Croatian peninsula, the so-called green Mediterranean - Istria is bathed in the colors of the blues sea, white stone and green landscapes.

Istria & Kvarner region – Blue seas, white stone and the green interior make up the colour scheme of Istria, the largest peninsula in Croatia. The blueness of its shoreline is contrasted by the lush greenery of its interior and the tiny, “acropolian” towns which, themselves somewhere between waking and sleeping, erase that thin line that divides the real from the illusion. And turn into your very own story. Istria is the sailing region with the most resourceful tourist offer in Croatia.

Istria is known for its untouched natural landscape, pebbly beaches, rich heritage and its fantastic Mediterranean-style food and wine. Submerged deeply in the clear blue waters of the Adriatic, Istrian peninsula opens the door to a sunny and warm Mediterranean. Multicultural and hospitable, this region nicely combines a multitude of diversity in a small area – everything in Istria is intimate... nature, towns and people. Istria’s beauty can be found in the variety of ancient castles & monuments, medieval towns, sea, people, villages and cities.There are many harbours and marinas scattered along this part of the Adriatic and almost all towns along the coast from Umag to Novigrad, Poreč, Vrsar, Rovinj and down to Pula, allow mooring on the waterfront or in one of several marinas – this is no surprise, as this part of the coastline has been developing in terms of maritime tourism for a long time. Kvarner is an area with a fascinating climate and vegetation diversity and compound of the seaside, islands and mountains, architecture and culture. Closeness of European regions has enabled developing tourism for already 160 years. With all the beauty and diversity of the Kvarner coast and islands, it is not surprising that this area is reffered to as the “Gateway to the Adriatic nautical paradise”. All of the islands in the channel, particularly the larger ones, Krk, Rab and Pag, have one characteristic in common; they all have two faces. The face turned towards the mainland in buffeted by the bura and is rocky, while their south and west facing shores are tame, wooded and sometime luxuriously green.

ACI marina Rovinj is located on the south-eastern side of Rovinj harbour with beautiful view over the town. ACI marina Pula is situated in the south-eastern part of the vast Pula harbour, in the very heart of the city and just a few hundred meters from the famous Roman Amphitheater. Tehnomont marina Veruda, Pula is located in southern part of Pula city, in a long and deep in the coast recessed bay of Veruda, well-protected from all the winds. Marina Punat is located on the island of Krk - the oldest marina in Croatia, founded in 1964.

Airport Pula - Pula Airport is the international airport serving Pula, Croatia, and is located 6 km from the city centre. Airport Pula is the najznačajnija biggest airport in Istria.

Airport Rijeka – Island Krk – Rijeka Airport is the international airport serving Rijeka, Croatia. It is located near the town of Omišalj on the island of Krk, 30 km from the center of Rijeka. Most of the traffic to and from the airport occurs during the summer months, when it is used by several European low-cost airlines flying tourists to the northern parts of the Croatian coast. 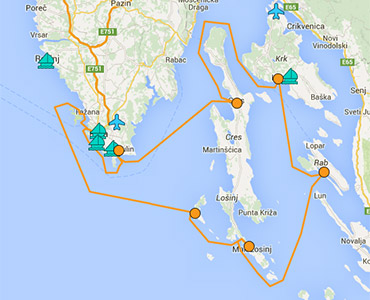 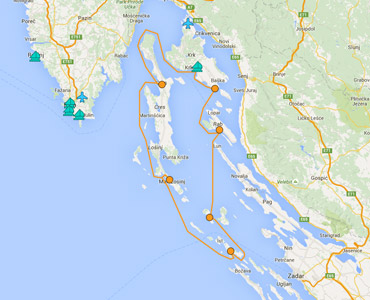 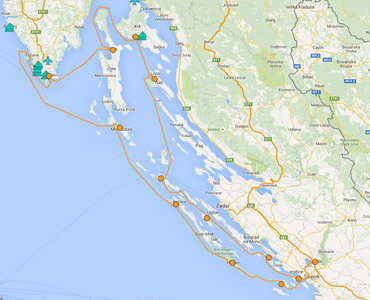 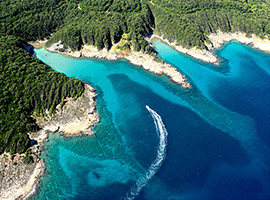